The pancreas is an abdominal glandular organ with both digestive (exocrine) and hormonal (endocrine) functions. It is located deep in the retroperitoneum, in the epigastrium and left hypochondrium regions.

The pancreas is divided into five parts- the head, uncinate process, neck, body and tail. Throughout the pancreas, there is an extensive duct system, connecting the acini together. The ducts then unite and drain into the main pancreatic duct, which joins with the common bile duct and drains into the duodenum, releasing the contents.

Most of the pancreas is made up of the exocrine portion, containing acinar and duct tissue, secreting digestive enzymes, water and bicarbonate to assist in digestion. Enzymes secreted include proteases, pancreatic lipases, and amylases. The bicarbonate helps in neutralising the stomach acid. This is a vital part of digestion as the small intestine is not specialised to withstand the strong acids from the stomach.

There are a number of factors involved in triggering the pancreas to release its secretions. This includes vagal innervation, secretin release and cholecystokinin release, which are all released in response to various stimuli.

In this section, learn more about the physiology of the gallbladder- read about the functions of the spleen. 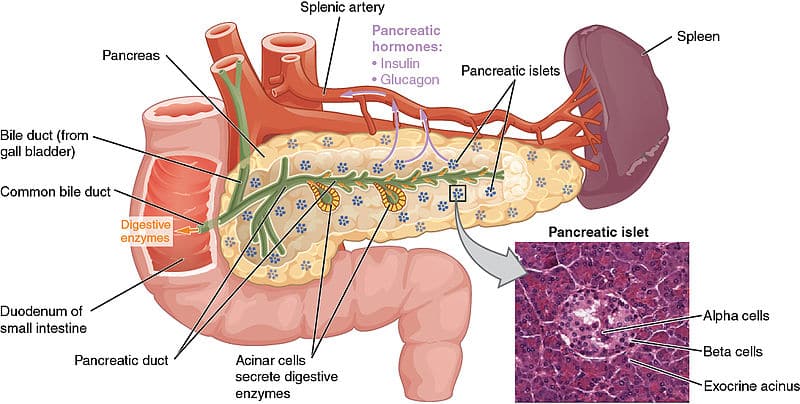